This Is the Biggest Sales Ops Mistake We’ve Seen

A piece of advice often attributed to Eleanor Roosevelt says, “Learn from the mistakes of others. You can’t live long enough to make them all yourself!”

In our opinion, this quotation is particularly applicable to sales ops practitioners. You see, the biggest mistake we’ve seen sales ops teams make — and one they make repeatedly — is failing to learn from the mistakes of others.

You are never going to avoid mistakes completely, of course. Being fallible is just part of being human. And hopefully, we all are learning from the mistakes we make ourselves. But if we can learn to avoid even a small fraction of the mistakes we would have made, we can become much more successful.

A few professions and industries have taken this lesson to heart and codified it within their best practices.

For example, in the field of software development, the Agile Manifesto advises, “At regular intervals, the team reflects on how to become more effective, then tunes and adjusts its behavior accordingly.” In practice, teams of software developers often schedule a retrospective every two to three weeks to discuss what has gone well and what has gone wrong so that they can learn from each other’s mistakes.

Similarly, many hospitals schedule morbidity and mortality (M&M) conferences to discuss patient cases that had poor outcomes. The goal is to allow physicians and caregivers to learn from the mistakes of their peers and to put systems into place that would prevent similar errors in the future.

And in transportation, the US government has decided that learning from the mistakes of others is so important that they have regulated it. The National Transportation Safety Board (NTSB) investigates every aviation accident, as well as serious train, highway, and boating accidents. They determine what went wrong and share their findings so that everyone in the industry can learn from what went wrong.

Without these kinds of processes in place, every software developer and every doctor and every airline would have to make every possible mistake on their own. They might learn their own lesson, but no one else would benefit. In many cases that would prove disastrous — or in the case of the hospitals or airlines, even deadly.

And unfortunately, sales ops professionals don’t have well-established practices for helping each other learn from our mistakes. In fact, that’s one of the reasons why we started the SellingBrew Playbook—to help ensure that teams don’t have to reinvent the wheel. We want you to have resources that document the problems others have experienced — and how to avoid or mitigate them.

What are some of those problems SellingBrew can help you avoid? Here are a few examples:

These are just a few of the dozens of areas where SellingBrew has captured lessons learned from other teams’ mistakes. Do yourself a favor and learn from their experience. It will save you a lot of time and stress compared to making all these mistakes on your own. Every sales operation wants to get new reps productive faster. But making that a reality can be a challenge. In this session, we share key insights and principles for making onboarding more efficient and effective. Bringing a new sales rep onto your team can be a very expensive and risky proposition. And many common onboarding strategies can make things worse instead of better. This guide exposes 10 best practices our research team has found to be most effective. For driving salesperson behavior, your sales comp plan is one of the most powerful tools at your disposal. But any incentive you offer can have disastrous unintended consequences. In this guide, learn about four pitfalls to avoid and ten things to consider when designing your comp plan. 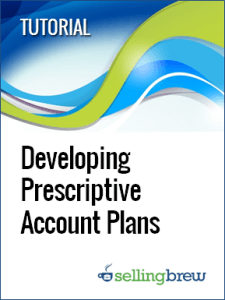 Learn a powerful 7-step process for growing sales from your existing customers. See how to identify exactly where growth opportunities are and create the account plans that will capture them.