Staying a Step Ahead in Sales Ops

The summer and fall of 1940 were some of the darkest days of World War II. The Nazis had conquered France and the Netherlands, leaving the British alone to stand against the threat. Hoping to solidify their hold on Europe, the Germans set up a sea blockade around the British Isles and began sending bombing raids nearly every night. The Battle of Britain had begun.

With the British outnumbered and outgunned, it seemed like just a matter of time before they inevitably surrendered.

But the British had one advantage — an early form of radar known as radio direction finding or RDF. It could detect the location and speed of enemy aircraft, but without computers, it could not provide an integrated view of the air battle like today’s systems can.

To compensate, British Air Chief Marshal Hugh Dowding devised what became known as the Dowding System. RDF operators stationed along the coast would detect incoming planes, then contact the Filter Room by telephone. There, plotters would take the information they received and place actual wooden blocks on a map table so that the commanders could see where the enemy planes were and where they were likely headed.

They then transmitted their insights back to commanders in the field who would order British planes into the sky based on the intelligence received and analyzed.

But at the time, it provided a crucial capability to transform raw data into actionable data. Without it, the Royal Air Force could not have been nearly so successful at defending their homeland. It was not enough to have the radar technology and know what was headed their way. They needed effective processes and systems to make sense of that data and respond effectively.

It’s all too easy for sales teams to fall into the trap of simply reacting to new market conditions as they change — especially in turbulent times. But it is far better to have a good understanding of what is likely to be coming before it arrives. And it is better still to have plans at the ready when you receive warning of what’s on the way.

If your sales intelligence capabilities could use a little improvement, we have some resources to help:

The good news for Sales Ops teams is that the tools you have at your disposal are far more sophisticated than what the Royal Air Force had during the Battle of Britain. Your own version of the Dowding System can give you much earlier warning about potential threats, giving you more time to ready your response. And if you set up your sales intelligence systems with care, you can be just as victorious as those British pilots. 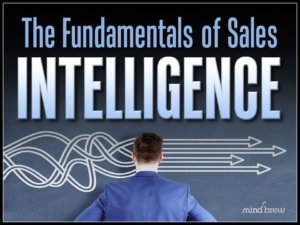 Your competitors' sales actions (and reactions) add even more complexity to a sales operation. So what can you do to better anticipate competitive moves and prevent them from spoiling your selling efforts? Pricing pressure is just a fact of life. But how well you handle that pressure can determine whether your business ultimately succeeds or fails. This guide exposes 15 ways to address (and prepare for) competitive pricing pressure. How to Enhance Customer Profitability and Lifetime Value At Scale