You might think that professionals who make their living rescuing people endangered by fire would be the last people to set a fire on purpose. But in actuality, about 100 U.S. firefighters are convicted of arson every year.

The psychological drivers behind firefighter arsonists are many and varied, but one important contributing factor is the way that society treats “heroes.” Some firefighters enjoy the excitement and limelight of having made a dramatic save so much that they set fires to keep the excitement going.

This situation shows up even more often in corporations than it does in firehouses. No, we don’t have a rash of executives setting board rooms on fire, but in a metaphorical sense, many companies have seen that rewarding “firefighters” creates more arsonists.

It’s natural to want to celebrate someone who solves an emergency. Within businesses, we celebrate these heroes in company emails. We might even tell and retell their stories so often that they become part of company legend.

But focusing on these sorts of heroics leads to two big problems:

Celebrating heroes isn’t inherently bad. But not addressing the behavior that caused an emergency situation is nearly criminal.

Imagine if we held a ticker-tape parade for a pilot that landed a plane after all its engines quit, but we never investigated and solved the problem that led to the engine failure. You might end up with dozens or hundreds of emergency situations where pilots needed to make dramatic landings—and certainly some of them would not succeed.

The best sales ops teams do things a little differently. They make it a practice to reward and celebrate the people who identify root causes and proactively solve them before an emergency occurs.

Celebrating these kinds of wins doesn’t always come naturally. It’s more like giving a ticker-tape parade for the quality engineer who finds a bad bearing in an engine. Or putting the homeowners who clear brush from around their home on the evening news.

But building this kind of culture is worth the intentional effort. It results in a team that consistently focuses on the kind of work that is most beneficial for the organization.

If you’d like to create this kind of culture in your company, we have some resources that can help. Diagnosing Sales Problems walks you through common causes of sales problems and explains how to solve them with real-world examples.

Taking Your Sales Operation to the Next Level examines what leading B2B sales operations do that sets them apart from others. (Hint: It includes root-cause analysis.)

And Building a Data-Driven Sales Operation offers a wealth of strategies and tactics for using your data to identify and solve problems proactively.

It’s great when someone steps up to be a hero. It’s even better when you have someone who toils in the background to make sure the emergency situations never occur in the first place. And those are the sales ops people you want to promote. 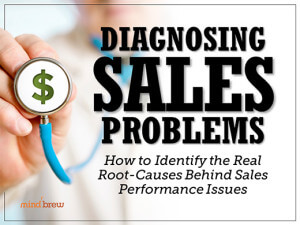 Taking Your Sales Operation to the Next Level It's common for sales operations to get mired in tactical sales support and administrative activities. This four-part recorded training session reveals the steps leading sales operations teams are taking to transform themselves into a much more proactive and strategic business function. 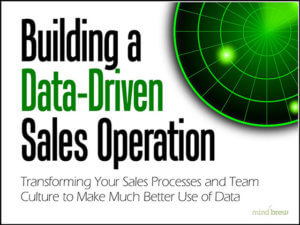 Building a data-driven sales operation where anecdotes and opinions have ruled for years is no easy task. In this on-demand webinar, learn about transforming your sales processes and team culture to make much better use of data.