Know If Your Sales Metrics Are Lying

Along certain stretches of the U.S. interstate highway system, you’ll see signs for a “speedometer check zone.” The idea is that you drive a steady speed from the first checkpoint to the second while timing yourself with a watch. At the end, you’ll probably see another sign explaining how much time it should have taken at different speeds, or you might have to do a little math to figure out for yourself if your speedometer was accurate (or not).

In an era when most of our cars have built in GPS and multiple displays telling us how fast we’re driving, these speedometer check zones might seem like a relic of a bygone time.

But the truth is, it’s actually much more common than people realize for their speedometers to be off a bit.

In some cases, you might have a glitch in one of the sensors in your vehicle caused by a bit of bad wiring or even some debris lodged in the electrical system. It’s also possible that one of the computers in your car has an algorithm for calculating speed that’s just a bit buggy. And most commonly of all, if you’ve changed the size of your wheels or your tires, the speedometer might be calculating distance incorrectly.

Most companies coast along using the same metrics, calculated in exactly the same way for years. They never think to perform a “speed check” to make sure those metrics are still correctly measuring what they were intended to measure. And just like with a speedometer, it’s really not uncommon for sales metrics to indicate something that isn’t quite true.

We have a lot more to say about the potential hazards of trusting your metrics too much in the Sales Ops Metrics Manifesto. You might also want to check out Sales Metrics Sales Leaders Should Be Managing and Measuring the Financial Impact of Sales Ops.

And while you’re at it, it’s not a bad idea to use your phone to time your car between a couple of mile markers. Maybe all those other drivers you’ve been getting irritated at aren’t going as slow as you think they are.

The Metrics Sales Leaders Should Be Managing 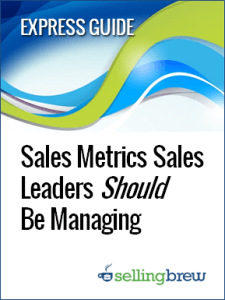 You need to track and manage sales metrics, but which metrics are the most important? In this guide based on research from Vantage Point Performance and the Sales Education Foundation, Jason Jordan reveals the ones that really matter. 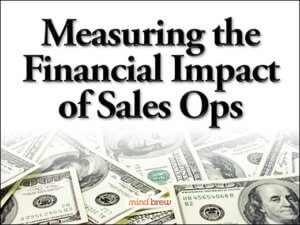 How do you measure a Sales Ops function? How do you calculate what you're really getting from your investments? In this on-demand webinar, learn what other Sales Ops groups are doing to measure and communicate their contributions in dollars and cents. How To Deal With Inflation