All Sales Ops Experts Can Do This

A proverb usually attributed to the ancient Greek philosopher Socrates says, “The beginning of wisdom is the definition of terms.”

We don’t know if Socrates actually said this or not because he didn’t write anything down himself. And Plato, who wrote down a lot of Socrates’ philosophizing, didn’t include this particular idea in any of his works. But we do know that enough people thought this was a valuable idea that they’ve passed it down for a long, long time.

Ultimately, if you can fully define a concept, you are at least starting to understand it. Conversely, if you can’t explain something, you probably don’t fully grasp it.

Psychology researchers have a term for this phenomenon. It’s called “the protégé effect.” The protégé effect is why good teachers often have their students try to teach a concept to their peers. It’s why surgeons-in-training follow the “see one, do one, teach one rule.” It’s why master tradesmen like plumbers and electricians often require journeymen to explain concepts to apprentices. It’s why racecar drivers study the principles of physics that govern the performance of their vehicles. It’s even one of the theories about why oldest children tend to better on IQ tests than their younger siblings—they have spent their lives learning things well enough to teach them to their little brothers and sisters.

Only when you understand something well enough to define its key concepts for someone else have you attained the most fundamental level of mastery.

That’s unfortunate because sales ops folks need to master a lot of concepts:

If you’ve spent much time on SellingBrew, you’ve probably heard a little bit about at least some of these concepts (at least we hope so!). But if you don’t understand any of them well enough to define them for your colleagues, it might be time for a refresher course. And naturally, we have a suggestion for how to make that happen.

SellingBrew is here to fill in the gaps created by the lack of formal training for the sales ops function. And our Crucial Sales Ops Concepts webinar is an excellent introduction to all these critical ideas. In addition to explaining the items in the list above, it also outlines the advantages that sales ops teams have compared to other teams, the mindset that makes sales ops teams successful, and key myths you should watch out for.

We hope that in no time you’ll be explaining these concepts to your colleagues—which will be the mark that you have started down the path to sales ops wisdom. 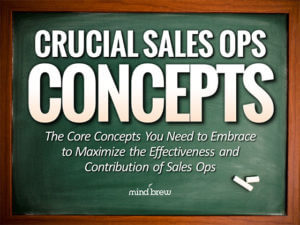 What sets a great Sales Ops team apart often comes down the core concepts and principles they embrace. In this on-demand webinar, you'll learn about 15 fundamental concepts that every Sales Ops leader and practitioner needs to understand inside and out.